While conventional current was used in the original definition of current flow, it was later discovered that the carrier of electric current is actually negatively charged. In the electron current flow model, a surplus of negative charges (electrons) at the negative terminal causes current to flow towards the electron deficient positive terminal:

How to Calculate Current

Current is measured as the amount of charge that flows past a single point in certain amount of time. Named after the French physicist Andre-Marie Ampere, the SI unit for current is called an Ampere (A), or amp for short.

Current can be calculated following this equation:

Where I is the current in Amperes, Q is the quantity of charge in Coulombs, and t is the time in seconds.

Therefore, 1 Ampere is defined as the flow of 1 Coulomb of charge per second.

Current is the Flow of Electrons

Electric current is defined as the rate of flow of electric charge. The charge is carried by electrons, so current can be thought of as the rate of flow of electrons. One electron has a charge of -1.602 × 10-19 Coulombs. The number is negative because electrons are negatively charged. This means that 1 Coulomb of charge has 6.2415 x 1018 electrons, and therefore 1 Ampere is the flow of 6.2415 x 1018 electrons per second.

We’re going to focus on direct current in this article, but if you want to learn more about alternating current check out our article on What is Alternating Current.

On a graph of voltage vs time, direct current would be a straight line:

By definition, an anode is the electrode through which current flows into a device. The cathode is the electrode through which current flows out of a device. There is a useful mnemonic called “ACID” to help remember this. ACID stands for “Anode Current Into Device”. This is important to keep in mind because it means that the anode and cathode on a battery changes depending on whether the battery is charging or discharging:

Hope you found this tutorial on direct current helpful! Feel free to leave a comment below if you have a question or comment about anything… 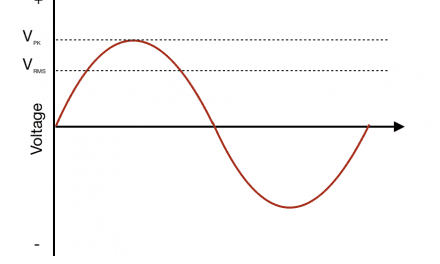