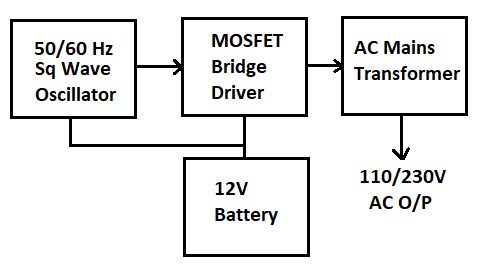 A power inverter is a device that can convert a DC power supply (typically from a battery), into a high voltage (110V-220V) AC current.

How to Build a Power Inverter

We are going to build a power inverter that takes its input power from a 12V battery, and outputs a 110V/230V AC current. The circuit is outlined in the block diagram below.

Here is the circuit schematic:

The 50Hz oscillator is provided by the 555 timer. Transistor Q1 is an inverting transistor to give a 180º phase shift. The frequency is controlled by potentiometer R5. It can be set to 50Hz or 60Hz.

A half-bridge MOSFET circuit is connected to the output of the 555 timer. The MOSFET transistors are switched on and off by the square wave generated by the 555 timer.

The size of the mains transformer and the amount of current that can be drawn from the battery will govern how much AC power is available. But in general, if you have a 100VA, 110V transformer, then you should be able to get close to 100VA / 110V = 0.9A. It’s only close because the transformer’s efficiency will probably be around 70%, so in reality the output current will be closer to about 0.63A.

When I built this circuit, I used a 12V battery providing 4.5A of current. The power inverter produced about 190V AC, which was enough to power a 60W incandescent lightbulb fairly brightly.

To analyze the circuit in more detail, I connected the gates of the MOSFETs to an oscilloscope to compare the waveforms at the output and input of the MOSFET circuit. Note that they are 180º out of phase:

This power inverter circuit worked quite nicely. Be sure to leave a comment below if you have questions about anything! 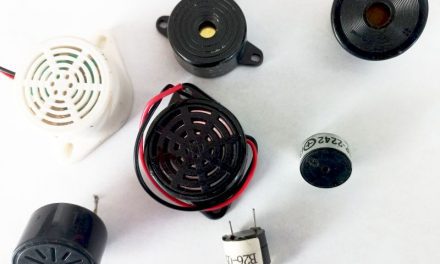 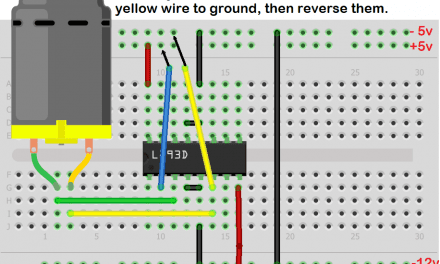