Rotary encoders are useful for controlling servos and stepper motors, navigating menus on LCD displays, and also as speedometers that can measure how fast a wheel is rotating. In this article, we will look at how to set up a rotary encoder on the Arduino by building a simple program that counts up and down when you turn the knob.

Overview of a Rotary Encoder

The Keyes KY-040 rotary encoder used in this article has 20 detents in a full rotation. This encoder also has a push button switch that can be controlled by pressing the knob down.

There are two types rotary encoders you’re likely to come across. One type is mounted to a PCB and has pins already attached like this one, the Keyes KY-040:

Another type is a stand alone version like this one:

Inside the body of the rotary encoder is a metal ring that is attached to the knob and rotates with the knob. The metal ring has tabs on it, with each tab corresponding to one detent:

On the bottom half of the casing there are two sets of metal arms:

Both of the inner arms are connected to the ground pin:

The outer arm on this side is connected to the DT pin:

The outer arm on this side is connected to the CLK pin:

Let’s look at a waveform diagram to see how this works. When the encoder is rotating a square wave is output from both the DT pin and the CLK pin. When you turn the knob clockwise the DT pin goes HIGH first. At the same time the CLK pin is LOW:

When you turn the knob counter-clockwise the CLK pin goes HIGH first and the DT pin is LOW:

How to Connect a Rotary Encoder to the Arduino

These are the parts you will need to build the project:

How to Program a Rotary Encoder on the Arduino

In the setup() section, we use pin mode to set each pin as an INPUT. We don’t want the switchPin to float, so we use the internal pullup resistor. We will print the counts to the serial monitor so we initialize that too.

If the knob is not turning counter clockwise, then it must be turning clockwise. So we can use an else statement to increase the count variable by one if the above if statements are not true.

Next we print the value stored in count to the serial monitor. As a last step, we set the clkPinLast variable equal to the clkPinCurrent variable. That way, the program can tell if the state of the clkPin has changed in the next cycle through the loop.

After you build the circuit and upload the code, open up the serial monitor and rotate the encoder knob. The count should increase or decrease once for each click of the encoder.

If you want to use the rotary encoder to control another device, the Arduino will need to balance taking reads from the encoder with sending signals to the other device. Unfortunately, the Arduino isn’t very good at doing multiple things at the same time.

For example, say you want to have an LED blinking on and off at the same time the encoder is counting up and down. Blinking an LED uses the delay() function, which causes the Arduino to stop what it’s doing for the duration of the delay. During that time it won’t be able to detect clicks from the rotary encoder.

On the Arduino Uno, pins 2 and 3 are the only pins that are able to trigger an interrupt service routine.

Here are the parts you will need to build this:

Follow the diagram below to connect the example circuit:

How to Program Interrupts With a Rotary Encoder

Once the circuit above is connected, upload this code to the Arduino:

This sketch is very similar to the sketch in the previous project, with a couple differences. Since now we need to trigger interrupt service routines, we have to connect the clkPin and dtPin to pins 2 and 3 instead of pins 3 and 4 as in the last sketch.

Next we create the interrupt service routine with void encoderInterrupt(). The code that goes inside the interrupt is the same code from the loop() section in the previous example that reads the dtPin and clkPin and increments and decrements the counter.

In the setup() section, we set the pin modes for each pin. The clkPin, dtPin, and switchPin are set the same as in the last example. But this time we also have an LED, so the ledPin variable is set as an OUTPUT.

After you build the circuit and upload the code, open up the serial monitor. The LED should be blinking on and off. Now when you turn the rotary encoder knob, the count on the serial monitor should go up and down without any missed clicks.

Leave a comment below if you have questions about anything! 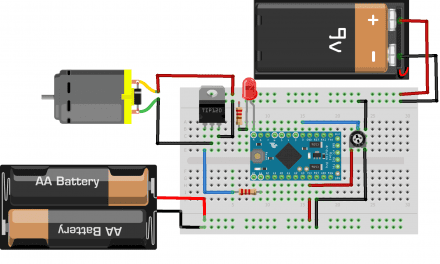 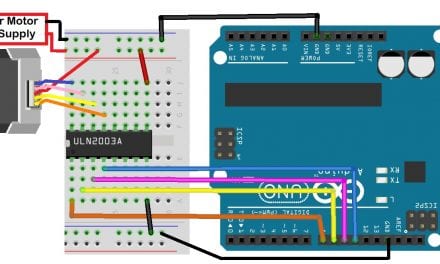 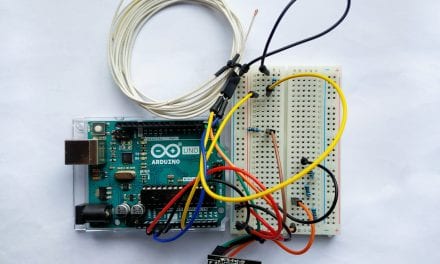